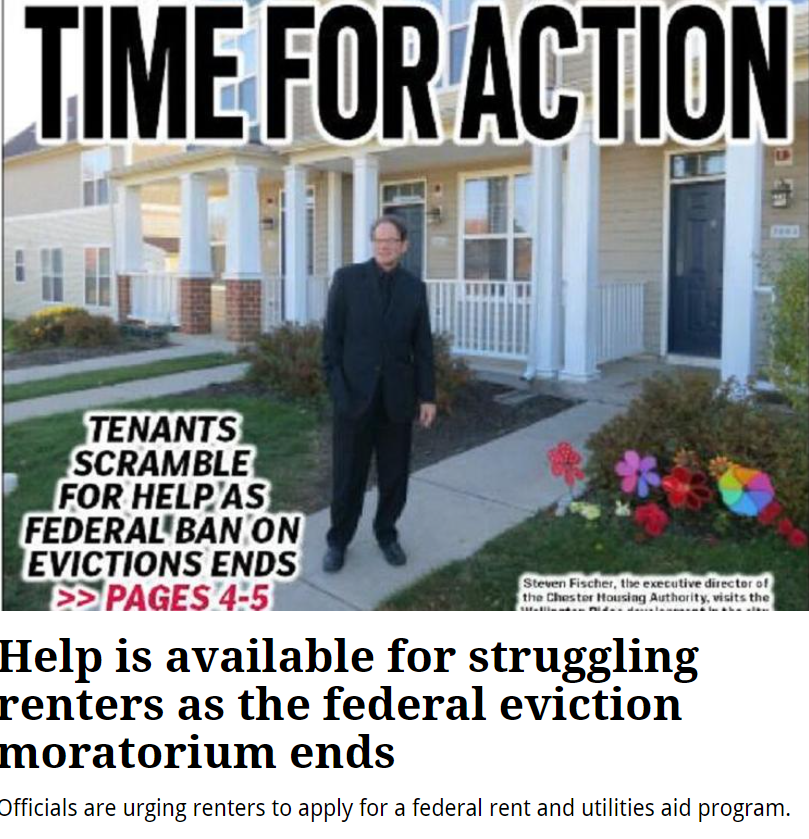 The Chester Housing Authority began taking actions seven months before the eviction moratorium was lifted in a method facilitators hope is a model to keep as many people in their homes as possible.

"This project is really a model that other housing authorities and maybe even (the U.S. Department of Housing and Urban Development) should look at in terms of how to approach these types of complex problems that may arise during pandemics," Marrea Walker-Smith, the CHA's appointed leader on the situation, said.

To prevent the spread of COVID-19, the Centers for Disease Control and Prevention issued an order last year that temporarily halted residential evictions throughout the country. That moratorium was lifted July 31 and landlords are now able to file motions in court to evict residents who have not paid their rents.

The Chester Housing Authority oversees the housing for 2,500 families and senior citizens through 12 housing developments in the city of Chester. Chartered in 1937, it provides housing for low- and moderate-income households.

Steven Fischer, executive director of the Chester Housing Authority, said when the eviction moratorium was first announced, the CHA was happy to hear of it because it was the kind of relief people needed.

The dilemma, he explained, was down the line.

"They were going to all own this money and we were going to be in court with them," Fischer said. "Not wanting to see that happen, I hired an extra person who's sole responsible to reach out to any tenant that had fallen into arrears ... We don’t want to be among the landlords flooding the courts. We’d rather things smoothly go back to normal ... I think we’re in a little bit better shape than we would have been because of this program."

Their role, he said, was to explain "This wasn’t just a free ride. Later on, we were going to have to face the music. What could we do to work together?”

The Delaware County ERA has received 7,000 applications and awarded 2,600 grants totaling $19.5 million since April 1. The administrator, Capital Access Inc., in working with county and non-profit organizations has provided online and in-person intake sessions, such as those held at the Chester Housing Authority.

County Councilman Kevin Madden said each day 50 to 60 residents apply for this program, which was allocated $37 million in the first round and an additional $11.9 million in the second.

"Our network of Community Partners and our investment in our production system means that Delco ERA has the capacity to effectively serve our residents in need," he said.

The program is prepared to continue to help as the eviction moratorium is lifted. Information is available at delco-era.com as well as in person every Saturday at the county's Upper Darby office on the fourth floor of 20 S. 69th St. Appointments are required and can be made at 484-729-4200 or by emailing [email protected]. Those facing eviction proceedings are processed with the highest priority.

The ERA program has had an impact in Chester.

"Many of our tenants benefited from the program," Fischer said. "We're ending up with less people in arrears than we normally have because of the education taking place ... In a public housing population, their level of education, on average, tends to be lower than average."

That's why last November, they brought on Marrea Walker-Smith for the Reset-to-Reality program.

Walker-Smith is from Chester and grew up in public housing, where she lived for 18 years. Her work follows in the steps of her mother, Dolores Walker, who was an advocate at the William Penn Project and became the first African American to serve on the Chester Housing Authority Board of Commissioners.

"She really relates well to the residents," Fischer said, adding that her expertise, experience and skill set make her very capable for this work. "She connects well with residents."

He added that she also works with Norman Weiss, our director of property management, and his staff.

Fischer explained that CHA residents have to keep the management informed of where they are working and since the program is taxpayer-funded, they can't let unpaid rent slide. While most cases get resolved before they reach the court level, the CHA executive director said they do have a handful of evictions each year.

But, he said the process of engaging lawyers and going to court combined with the uncertainty of the outcome can be complex, which is part of the reason why they didn't want their residents in a bigger hole than when the pandemic started because they didn't pay their rent during the crisis.

"I created opportunities to engage with the residents to get them back on track," she said, adding that the population CHA serves was most hit by COVID in terms of people who were sick and people who died from COVID.

Having lost a brother herself to the virus in January and her mother to lymphoma last year, Walker-Smith added, "Sometimes rent is the last thing on your mind to be honest.”

Add to that propaganda that the world is coming to an end with others struggling to keep their children on pace with online schooling and trying to take care of everyone alogn with anxiety and the lack of access to therapy and the situation gets very challenging.

"What I found was people really wanted to talk to somebody," Walker-Smith said, adding that she approached these conversations as a way to find out how the residents were and how she could help them. "From there, it just poured out, so many different stories. I was able to share with them my story as well. We began to bond. They were just as much a comfort to me as I was to them."

She said these discussions focused on sharing and engagement with no judgement helped reset these residents and they were able to create a path to paying the rent. And, she kept in touch with them monthly depending on when they wanted to talk or text.

"You have to be able to meet people where they are and utilize technology to be a bridge for communication," Walker-Smith said. "It wasn’t just about the rent. People want to do what’s right.”

"I'm hoping that they look at this as a model for how to help," she said. "It doesn’t have to be as many evictions in the court system as it is.”

Walker-Smith said she found so many people who wanted to work, who enjoyed going to work and the pandemic wrecked havoc on those routines.

She said she looked forward to continuing to work through creating a longer term sustainability program over the next year for the authority, as she offered the message she hoped residents took away from interaction with Reset-to-Reality.

"I want them to basically take away realizing that they’re resilient," Walker-Smith said, adding that surrendering wasn't an option so survival was key and possible through reaching out and getting support. "We can get through this. We can't give up."