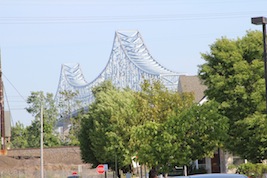 The Chester Housing Authority's (CHA) history is one built on a promising vision, derailed by corruption and mismanagement, and ultimately redeemed through the unwavering dedication of Chester residents and the agency's stewards.

Today, CHA - which manages approximately 2,400 units, including 800 public housing units in ten developments and nearly 1,600 Housing Choice Vouchers - is a model of efficient, effective and compassionate public service in the City of Chester.

Over the last two decades, the agency's housing inventory has been overhauled, rebuilt and rehabilitated, has helped spur economic and social revitalization throughout Chester, and allowed CHA to establish strong partnerships with residents and community organizations. Incorporating acing innovation and technology, the Authority has enhanced its accessibility to residents and prospective partners and its efficiency as a public agency. Amidst several years of funding shortfalls and increasingly challenging political and economic trends, CHA and its staff have achieved stronger engagement with residents, established innovative and effective programs, and served as an anchor for efforts to rejuvenate the City of Chester.

The Authority's recent accomplishments and continuing progress arose from a long period of substantial adversity up to the 1990s. In 1989, residents filed a class action lawsuit alleging that the agency's deplorable conditions had allowed for "de facto demolition" of the area's public housing.

After the United States Department of Housing and Urban Development (HUD) failed in its attempt to take over and rectify the agency's operations, Judge Norma L. Shapiro of the United States District Court for the Eastern District of Pennsylvania appointed a receiver, former New York Housing Commissioner Robert C. Rosenberg, to replace the Authority's HUD-appointed director in 1994.

Under the receiver's oversight and Judge Shapiro's scrutiny, CHA was transformed from an agency considered "severely distressed" by HUD to one of sound function from 1994 and 2005. By managing and leveraging $109 million in public and private funds, CHA drove the revitalization of a significant portion of the Authority's housing stock and the modernization of several Chester communities.

Beyond transforming the agency's housing units during this period, a fully-certified police force was established, programs geared towards resident development were created, and a sustainability committee of private and public sector leaders was put in place to assist with CHA's progress. The Authority sought to build on this infusion of economic activity and social development by crafting a long-term plan focused on expanding the community's commercial and cultural offerings while also creating homeownership opportunity.

In 2005, Judge Shapiro elected to end Rosenberg's tenure as receiver of the Chester Housing Authority and to hire Steven A. Fischer as Executive Director.

At the outset of Fischer's tenure, Judge Shapiro appointed citizen leaders to the Authority's reconstituted Board of Directors, whose engagement and strength grew rapidly over the following years. In collaboration with the Board and partners throughout the community, CHA pursued a series of goals laid out in 2005:

At the same time, CHA's unwavering focus on co-stewardship - working in dignified partnership with residents and resident leaders - as well as independence and integrity has served to build upon the earlier success of the receivership. More residents are caring for their properties and remaining current on their rent payments. An unprecedented number of residents are participating in wellness programs such as community gardening, group exercise and nutrition. This renewed collaboration, along with the authority's more efficient operations and willingness to pursue innovative policies and programs, has allowed CHA to distance itself from many of the local, state and federal pressures that had previously hindered the agency's performance.

Though challenges are constant and demand for the Authority's services exceeds the resources available, the Chester Housing Authority is committed to building on its substantial progress over the last two decades and to continuing to make a positive impact on the City of Chester, its residents, businesses and institutions.